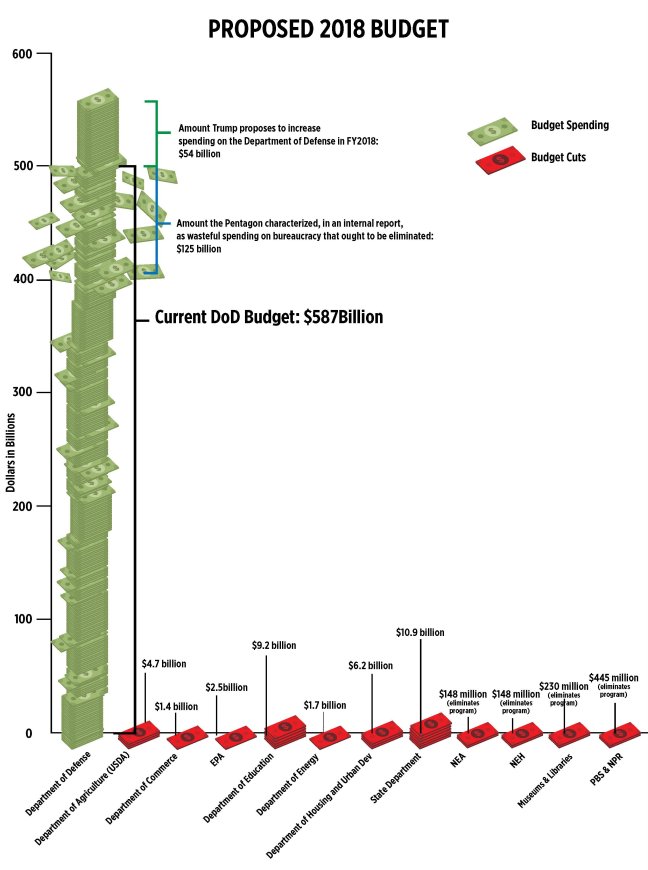 To understand the magnitude of Donald Trump’s distorted priorities, we compared Pentagon spending with domestic programs he wants to cut. “Waste” alone dwarfs all other agency spending. Take a look.

To understand the magnitude of Donald Trump’s distorted priorities, we compared Pentagon spending, which Trump wants to increase, with the domestic programs he wants to cut. To help pay for more defense spending, Trump’s budget proposal imposes massive cuts to domestic programs—from foreign aid to research on climate change to safeguards for clean air and water to meals on wheels for the elderly and after-school programs for kids.

If we can cut enough librarians, scientists and after-school programs for kids, Trump’s budget director calculates, we can fund more weapons programs—including a renewed investment in nuclear weapons.

President Trump and Secretary of Education DeVos used a private school Florida to kick off their campaign to promote the privatization of public schools.

President Trump and Education Secretary DeVos kicked off their public school privatization tour, but they neglected to mention that so-called school choice disempowers parents and shortchanges students in what is often a chase for profits.

Educators are sounding the alarm that students have become actual targets and collateral damage in the Trump administration’s assault on immigrants.

Educators are sounding the alarm that students have become actual targets and collateral damage in the Trump administration’s assault on immigrants.

Hear from an educator whose own family has experienced homelessness how lawmakers play a role in keeping homeless kids in school. 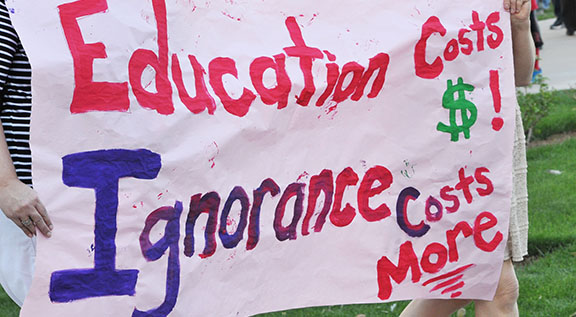 The Trump administration is proposing concrete steps to divert $1.4 billion in taxpayer money to private and charter schools.

Despite his relatively minor crime, at trial the state of Louisiana cast Shannon as “the worst kind of defendant. He’s a predator.”

Under Louisiana’s habitual offender law, he was sentenced to life in prison in 2004 after stealing just $14.

The life sentence ended up as a death sentence. After delays in treatment, Hurd died in prison of cancer earlier this month.

Source: Shannon Hurd Got a Life Sentence for Stealing $14. Then He Died in Prison From Untreated Cancer.

“This theory doesn’t even make sense,” a defense lawyer said. “The government is just throwing the worst ideologies together to try and paint the worst possible picture of the defendant.”

Is collecting Nazi memorabilia evidence of supporting the Islamic State? That’s the question a U.S. District Court is facing in the case of a former police officer accused of buying gift cards for an FBI informant posing as a member of ISIS. Prosecutors are arguing that ISIS and the Nazis share “a similarity in ideology,” and thus the 36-year-old Virginia man’s “confederate flag, Ku Klux Klan literature, and historical books about the Nazis” are relevant to the case.

After years of hearing how kindergarten has been turned into the new first grade, you’d think at the other end of the K-12 pipeline we would find highly advanced students. And yet– not so much.

This is the result of accelerated early instruction done primarily in the service of test-centric schooling (“We have to get them started early– otherwise how will they be ready for the Big Standardized Test??”)

It is lost years.

By the time these same start-em-early push-em-hard students arrive at high school classrooms, they are behind compared to the students that we saw twenty-five or fifteen or even ten years ago. They know fewer things, have fewer skills, and express lower academic aspirations.

Why? I can offer a couple of theories.

They have learned to hate reading.

They have learned that reading is this thing you do with short, disconnected, context-free selections, and when you read, you are not looking for something that sparks interest or enjoyment or curiosity or wonder or the pleasure of feeling your brain expanded and grown. You read so that, in a moment, you’ll be able to answer the questions that someone else wrote– and by “answer” we mean from the potions given the one answer that someone else has decided is “correct.” There will be no expression of your own personal insights, and never the possibility that there’s more than one way to understand the text. It is a stilted, cramped way to approach reading, and it means that students grow up with a stilted, cramped notion of what reading even is, or why human beings actually do it.

With some luck, some students will still discover the joy and, yes, utility of reading– but they will discover outside of school, and they will not expect that the kind of reading that they love has anything to d with the test-centered “reading”: they are required to do in school. That higher level course has additional “reading”? Then I surely don’t want to sign up for that. And since the real task here, the real point of the whole exercise is not the reading, but the answering of questions about the reading– well, I bet I can find a time-saving way to cut that corner. Because after enough years of this, many students conclude that “reading” is something to actively avoid.

There’s no pleasure there, no discovery, no ideas to mull and discuss, no characters who help us pick apart the thorny questions of how to be human in the world. Just clues for answering the BS Test questions.

Their years are shorter.

By the time we’ve subtracted all those days, the school year is a few weeks, a month, maybe even more than a month shorter. It was only 180 days to begin with. The test-centric school has amped up a feature of education that has always frustrated teachers– the 180 day year is a zero um game, a bathtub full to the absolute rim with water. You cannot add something without removing something else. A really feisty or frustrated teacher might turn to an administrator who just said “Add this to your class” and say, “Fine– what exactly do you want me to stop teaching?” But mostly we’re expected to just make do, to perform some sort of miracle by which we stuff ten more rabbits into the hat.

It doesn’t work. Every year students get less actual instruction than they used to, which means their teacher next year finds them a little bit behind, so the school year that used to start on Day One now starts on Day Thirty after the students are caught up– and then it ends on Day 160 because, you know, testing. So the following year those students are that much more behind. And so on, and so on, and so on.

In the end, kindergarten may be the new first grade, but for many students, twelfth grade is the new eleventh grade.

There are certainly students who escape this effect, and there are certainly clever teachers who mitigate it. But mostly the injection of toxic testing into the bloodstream of US education has had the predictable effect– it has weakened and damaged the entire body.

Mind you, that wasn’t what we were promised. The injection of test-based accountability was going to transform the Steve Rogers of US schooling into a might Captain America of education. Those tests, linked to The Standards That Dare Not Speak Their Name (but which have never quite gone away, either), were going to lead to a surge in new and successful college students. Test scores would rocket upward, and we would get to be the Belle of the Ball at the next PISA Prom. We were going to have success out the wazoo.

And yet, none of that is happened. Mind you, I don’t think the BS Test scores mean jack, and they have never been and will never be my measure of success. But reformsters chose the game, set the rules, picked the measurement they wanted (BS Test scores) and they STILL lost the game. We have wasted over fifteen years of education; some students have seen their entire schooling consumed by test-centric baloney.

Yet we keep plowing on, keep committing to Testing Uber Alles. We are losing students, losing education opportunities, losing the chance to awaken some young humans to what they could be and could become– instead, we are still trying to mash their spirits flat under the heavy testing hand. We are losing year that we cannot get back, cannot give back, and this is not okay.