Where does pretending come in? It relates to what philosophers call “counterfactual” thinking, like Einstein wondering what would happen if a train went at the speed of light.

In Educating Young Children, Mary Hohmann and David P. Weikart discuss the HighScope preschool program and the welcome backseat adults often take to allow children to freely play. They say: When children are playing or starting to play, and are receptive to other players, adults can sometimes join them in a nondisruptive manner. This is real play.

via Fake Play and Its Dangerous Alignment to Standards and Data

(This article was written and submitted by former GRPS teacher, Jack Prince)

The M.Live article posted July 22 titled: See 55M in Grand Rapids Schools summer construction/improvement projects raises some real questions. Could not the bond passed five years ago been implemented sooner for the benefit of the students at GRPS?

There are many reasons why I would like to support Mayor Pete Buttigieg. He’s young, he is well-educated, he is smart, he has an admirable record of service to his country, he’s brimming with ideas. I find him very attractive on many levels.

But on education, he is a stealth corporate reformer.

I had an inkling of this when I read a review of his autobiography, which described his formative years at McKinsey and his data-driven, technocratic approach to solving problems. But I didn’t reach a judgment.

Then I learned more when a friend sent me an invitation to a fundraiser for Mayor Pete, hosted by Reed Hastings. Hastings is the billionaire founder of Netflix who is a charter school zealot. He served on the California State Board of Education where he used his influence to minimize any regulation of charters. Since then, he has given many millions to charters…

This blog will take a one-week, mid-summer break.  Look for a new post on Monday, August 5.

We are in the midst of a wave of state school takeovers.

On Tuesday evening In Providence, Rhode Island, the state Council of Elementary and Secondary Education granted the authority for Rhode Island’s recently appointed State Education Commissioner, Angelica Infante-Green, to take over the Providence Schools. A new and scathing report by a team from John Hopkins University had criticized the current operation of the school district—already under mayoral governance.  For the Providence Journal,Linda Borg reports: “Under a 1997 statute, Infante-Green now has the power to revamp the teachers’ contract, revise how the school district is governed, even make decisions over hiring and firing… Infante-Green also confirmed that she will hire a superintendent to takeover the schools by early November. In fact, she is already speaking with several individuals, although…

I am reposting this post because the main link was dead and I fixed it. Also, it was originally titled “The D.C. ‘Miracle’ turns to Ashes,” and a reader said a miracle can’t turn to ashes. So it has a new title.

A year ago, reformers were touting D.C. as their triumphant example. Those graduation rates!

Unfortunately, like every other reformer tale, it was a hoax. The graduation rate was phony. Students were walking across the stage without the necessary attendance or credits. Metrics!

“Critics view the problems, particularly the attendance issue, as an indictment of the entire data-driven evaluation system instituted a more than a decade ago when then-Mayor Adrian Fenty took over the school system and appointed Michelle Rhee as the first chancellor. Rhee’s ambitious plan to clear out dead wood and focus on accountability for teachers and administrators landed her on the cover of…

It has been 10 weeks since the Civilian Appeals Board voted to overturn the GRPD’s Internal Affairs investigation of Captain VanderKooi.

The Grand Rapids Civilian Appeals Board (CAB) voted 6 – 2, to overturn the decision by the GRPD to return VanderKooi to active duty. On May 15, when the CAB was making there decision to overturn the GRPD’s decision about VanderKooi, there were two overriding themes. First, that the GRPD conducted a weak investigation, which was evident since when questioned by the CAB members, the two cops involved in the investigation either couldn’t answer the questions or had vague responses. Secondly, to many people in the room, even without seeing all the documentation that the Civilian Appeals Board had, it was clear that Captain VanderKooi demonstrated significant bias during the Jilmar Ramos-Gomez case, which is exactly the conclusion that the Civilian Appeals Board landed on.

There has been a fifty-year push to reform education using business management principles. In the period, Harvard Business School has trumped Columbia Teacher College concerning pedagogy. Unfortunately, the results are an unmitigated disaster for most communities and students. This market based endeavor – financed by billionaires – has transformed public schools into non-democratic profit centers. It is the precursor to the ultimate goal of dismantling universal free public education.

The radical right is pushing to privatize everything from policing; to prisons; to schools. They have spread the gospel that governments are incapable of solving problems and only businessmen can solve problems. In his first inaugural address, Ronald Reagan declared “…, government is not the solution to our problem; government is the problem.” Viewing society as consisting of “makers” and “takers,” these apostles of privatization fear the tyranny of democratic majorities. They strive to make property…

Over eighty percent of white evangelicals (many of them women) voted for Donald Trump in 2016, less than two weeks after video surfaced of him speaking with historic vulgarity about women. It would begin a pattern that would be repeated countless times in subsequent months, right up to this present second: professed Christians suddenly becoming […]

BENTON HARBOR — State officials “helping” failing school districts are only treating the symptoms and not dealing with the real problem, said Tom Watkins, who was state superintendent from 2001 to 2005.

“It’s kind of like standing downriver and pulling drowning victims out,” he said. “Maybe it’s about time we went upstream and asked, ‘Who’s throwing everybody in the river?’”

He said everyone needs to work together to fix the state’s education system, which has been broken for decades.

“We know that there are these big issues of poverty,” he said. “… Educating children will benefit all of us, and yet we kind of look the other way.”

He said pretending there isn’t a major problem with the state’s education system is like pretending that Michigan’s roads aren’t riddled with potholes.

“If you take a look at the roads, people can feel the bumps and get the pain of the potholes,” he said. “… The schools are viewed as – out of sight, out of mind. They’re only viewed as a problem if your kid is in it.”  – READ – SHARE – DISCUSS – LEARN MORE HERE – 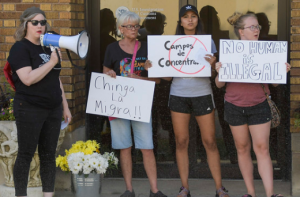 Last night, roughly 80 people came out to participate in a vigil to abolish ICE in Kent County. The action was organized by GR Rapid Response to ICE and was meant to do several things.

First, we wanted to show people one of the locations where ICE operates out of. We chose this location because it is their operational facility, where agents are deployed from to go into our community and rip people from their families.

Second, we wanted to share information about some of the families that ICE has directly impacted through fear and violence, by reading examples and then placing flowers by the ICE building for each person affected.

We are here at 517 Ottawa Ave NW, one of three ICE offices in Grand Rapids. When our immigrant neighbors are taken by ICE–from their homes, from their cars, on their way to work or to…