“The Great Recession of 2008 forced many cities to rebuild their economies. But in many places, the recovery has been uneven, with some cities enacting policies that increase equity across racial and ethnic groups, while others widened the gaps between the haves and the have nots. A new study from nonprofit research organization Urban Institute explores which cities prioritized inclusion in their struggle for economic growth.”

Last week, the online site Colorlines, post a story about a new study looking at how US cities with populations of 100,000 or more has dealt with the recovery since the 2007-2008 economic recession.

The Great Recession of 2008 forced many cities to rebuild their economies. But in many places, the recovery has been uneven, with some cities enacting policies that increase equity across racial and ethnic groups, while others widened the gaps between the haves and the have nots. A new study from nonprofit research organization Urban Institute explores which cities prioritized inclusion in their struggle for economic growth.

The study done by the Urban Institute, Inclusive Recovery in US Cities, was released just weeks ago. Their research looks at both economic inclusion and racial inclusion:

My hope is that one by one the 50 states and DC step up to provide these protections as the DeVos aim is to destroy the DoE anyway.

There continue to be warning signs that Betsy DeVos’s Department of Education is backing away from its responsibility to protect students’ civil rights:

“On Friday, in Grand Rapids, a national right-wing organization will meet to create proposals that will give more power to corporations, attack public education, promote greater privatization of government and craft energy policy that will continue to benefit the oil and gas industry as we all suffer the consequences of climate change. How can we allow this kind of gathering to take place in this city, especially knowing that they seek to use wealth to influence public policy that gives private power greater control over our lives?”

The American Legislative Exchange Council, also known as ALEC, will be having their 2018 Spring Task Force Summit in Grand Rapids all day long, this Friday, April 27. 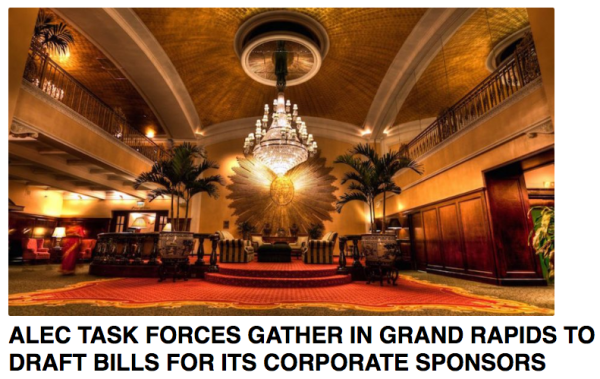 The ALEC event will be held at the Amway Grand Plaza and is a private event for members only. This is not surprising, as ALEC does not want journalists or any one else to expose what new policies they are crafting that will promote their neo-liberal economic agenda.

ALEC, of course, is the creation of the Koch Brothers, and is designed to implement policies that promote privatization, greater corporate control, plus undermine unions and attack public education.

The Center for Media & Democracy (CMD) has done more to expose the efforts of ALEC over the years and they are the ones who discovered that ALEC will be in Grand Rapids this weekend.

In an article by David Armiak and

Just after noon today, about 25 people gathered in front of the Grand Rapids office of Immigration and Customs Enforcement (ICE).

The Press Conference was called by Movimiento Cosecha GR and the GR Rapid Response to ICE project, since there has been an increase in ICE activity, including arrests and intimidation.

When I arrived for the press conference, there were two ICE agents wearing bullet proof vests and standing next to white Homeland Security vehicles. One of the ICE agents told us that “they were there to make sure that everyone was safe.” This is what those who critique law enforcement strategy as the management strategy, where cops try to manage what community groups do, always presenting a “we are here to help” posture.

After most people had arrived for the Press Conference, there also appeared members of the GRPD, although they just circled the block a few times to…

Last Thursday, Arizona’s teachers voted to walk out tomorrow, April 26, unless Governor Doug Ducey can show there is a way to pay for his recent promise to raise teachers’ salaries in one of the nation’s lowest paying states. For the Washington Post, Valerie Strauss reports: “Ducey said he would give teachers a 20 percent pay hike by 2020. But Arizona teachers, who are among the lowest paid in the country, say the governor has not identified how he would pay for it, and they say their schools are starving for funds after massive budget cuts since the Great Recession. According to the nonprofit group Arizona Schools Now, the Arizona legislature cut $1.5 billion in school funding while a 2016 voter-approved initiative has restored only 18 percent.”

“The Farm Bill coming out of the House Agricultural Committee will hurt poor children, their families, and their public schools. All this is why the National Education Association is asking its members to send its action alert asking members of the U.S. House of Representatives to vote against the Farm Bill that was passed out of committee last week. You might also want to send NEA’s action alert to your Congressional representative.”

With voting along strict party lines, the U.S. House Agriculture Committee passed a 2018 Farm Bill out of committee last Wednesday, a bill which would add punitive work requirements curtailing families’ participation in the Supplemental Nutritional Assistance Program (SNAP), formerly known as food stamps.  Committee Chairman Rep. Mike Conaway has said he will bring the bill to the House floor for a vote in May.  The bill would not only reduce families’ access to SNAP, but it would also limit students’ access to free school lunch and breakfast programs.

Marc Egan, Director of Government Relations for the National Education Association, sent a letter to all members of the U.S. House of Representatives last week to urge them to vote NO on this bill when it comes before the full House next month.  Egan explains the implications for federally funded school meals: “This bill makes unnecessary changes to certification and… 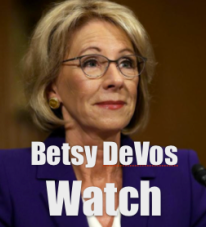 Last Wednesday, Secretary of Education, Betsy DeVos, announced the confirmation of Carlos G. Muñiz as the Education Department’s General Counsel. In a statement that DeVos released, she said:

“We are pleased to finally have Carlos on the team. After a protracted confirmation process, Carlos can at last get to work on behalf of our nation’s students. He has dedicated his career to upholding the law, and his insight and expertise will be invaluable as we work to advance educational opportunities for all students.“

As a lawyer, Muniz is currently a partner with McGuireWoods LLP and a senior vice president in the National & Multistate Strategies group of McGuireWoods Consulting LLC. Muniz previously workedas Florida Attorney General Pam Bondi’s chief of staff for three years, between 2011 and 2014. During his time in that capacity, Muniz represented Florida State University in a lawsuit brought by a student…

And after you read this blog post by Jeff Smith, visit https://www.2030wrg.org/ to learn how water is being commoditized by banks and beverage companies across the globe. Nestle’s wells in Michigan are just the beginning. We here are just a test case. If they succeed in continue to pilfer Michigan’s greatest natural resource the planet is doomed.

Greenwashing is a term that eco-activists have used for several decades now, in an attempt to expose the hypocrisy of capitalism. Green Capitalism is especially visible around the time that we celebrate earth day. In fact, corporations have pretty much hijacked earth day, by trying to convince us that they too care about the planet. Nothing could be further from the truth, since what drives capitalism is labor exploitation, profits and exponential growth……none of which is sustainable.

A great example of greenwashing in the West Michigan-based product known as Boxed Water. Boxed Water markets themselves as a product that is Better For Our Planet. The company’s main argument…

Politicians never seem to try telling dentists how to dent or doctors how to doct but boy oh boy do they ever enjoy telling teachers how to teach.

As I think today about states’ rankings and ratings of school districts and specific schools within districts, Rothstein’s book comes to mind. The Every Student Succeeds Act (ESSA) (which replaced No Child Left Behind) requires labeling of schools. Congress has said that states must test students every year and then—based on the test scores and graduation rates and at least one other factor the federal government and states choose to use—rate schools. Congress says the purpose of this exercise is to help parents know about the…