An additional 650,000 low-income people have been able to get health care through Michigan’s Medicaid expansion , with the federal government picking up

Michigan gubernatorial candidate Bill Cobbs, left, visits with John Stewart of Marquette at the Vierling Restaurant and Marquette Harbor Brewery on Saturday in a meet-and-greet with the public. Cobbs represents the Democratic Party. (Journal photo by Christie Bleck)

MARQUETTE — Michigan gubernatorial candidate Bill Cobbs, representing the Democratic Party, talked about his platform on Saturday at a meet-and-greet at the Vierling Restaurant and Marquette Harbor Brewery.

Cobbs, 63, of Farmington Hills, is a former executive for the Xerox Corp. Saturday marked his first trip to the Upper Peninsula during this campaign cycle.

“I fundamentally believe that citizens in the state of Michigan aren’t given a fair shake,” Cobbs said.

Cobbs served with the U.S. Navy. His employment includes serving as a police officer and working his way up from a stock boy in a Detroit clothing store to a global vice president of Xerox, a Fortune 500 company.

After holding other business leadership positions, Cobbs, who now is retired, became engaged in the political process in Michigan about six years ago when he began to see some of the things that were happening.

About two years ago, he started to think about the need for someone who had a different perspective to run for governor.

There are four primary points in his platform…

I recently covered the launching of The Line, a new website helmed by Disgraced LAUSD Superintendent John Deasy and dedicated to the proposition that Chiefs for Change should have an avenue to keep pumping out warmed-over education reform baloney.

As soon as I started digging, I realized I already knew about Frontline, the company behind the website. That familiar logo had started popping up on our screens at school this year because Frontline just bought out Aesop, the software service that has been managing our teacher absences.

Like many districts, a few years ago we shifted our substitute system from the traditional Harried Secretary On The Phone from 5 AM until Two Minutes Before School Starts System to an on-line service that lets teachers enter absences and substitutes pick them up, all on line, like a scholastic match.com. It’s a vastly superior system to the Frantic Phone Call system. But, boy– if one company was doing that for many school districts, wouldn’t they collect a ton of data.

Well, yes. Yes they would.

Part of Frontline’s pitch is just having all sorts of data at your fingertips to run your school efficiently– their promotional video shows an administrator walking through the halls of a school carrying a table and looking at numbers on a display that must mean something helpful because data! Their main platform promises that you can manage people without paper, handle recruiting and hiring, watch over absences, do great professional development, and work on your special ed stuff (some of this represents an expansion of Frontline’s work– Aesop is not the only company they’ve acquired recently– since January of 2016, Frontline has acquired at least four companies, including some that work tracking special ed data).

Frontline likes a lot of trendy things. Their picture of professional development includes personalized targeted development, which sounds a lot like badges and micro-competencies (log on and do a fifteen minute video-plus-test about Wait Time and voila! you’re now better!)

FLRI is headed up by Elizabeth Combs, previously the chief of My Learning Plan. Frontline notes that she “brings a passion for leveraging technology to support educator growth” and, yes, leveraging technology is a great source of passion for so many of us. Other backgrounds represented in the advisory board include human resources, consulting, human capital, consulting, consulting– oh, and one Teach for America alumnus. FLRI has also entered into a collaboration with Johns Hopkins, a university leading in the field of Renting Out a Respected Name in Academia To Make Your Business Look More Legit.

FLRI offers reports like its end-of-the-year teacher absence and substitute busyness report. Frontline has crunched numbers from 2.7 million employees at 4,900 “educational organizations.” The report is not exactly filled with shocking reveals (teacher absences are harder to fill on Fridays and with less lead time; the most common reason for absence is illness). But I find it just a little bit sobering to realize that every time I miss a day, I’m participating in a giant research project that is collecting my data.

There’s also a two-part report about professional development, predicated on the idea that the Every Student Succeeds Act gives the “most prescriptive federal definition” of quality PD ever. FLRI determines that the definition centers on PD that is “sustained, intensive, collaborative, job-embedded, data-driven and classroom-focused.” Based on that definition, it turns out that most PD currently sucks, a finding that is even less surprising than the discovery that it’s harder to get subs on a Friday in May. This is even with FLRI’s sort-of-silly definitions of these terms– “sustained” means “meets at least three times” and “intensive” means “takes at least 4.5 hours.” The good news is that only 8% of PD activities were “data-driven,” which is probably 8% too many until such time as we can come up with some kind of data that deserves to drive anything more important than a miniature clown car (spoiler alert: Big Standardized Tests and their sad siblings like MAP will not provide that data).

So Frontline aspires to be a multi-tasking major player, offering “research” that proves how much you need their products, and the products that you so desperately need. All of it cleverly resting on a giant foundation built on the data-mining performed on the services you’re already buying from them. It’s a forward-thinking business model in keeping with many tech giants, except that Facebook and Google data-mine you and treat you as the product without getting you to pay for the privilege.

A 64-year-old Florida man tried to set a convenience store on fire because he thought the owners were Muslim, St. Lucie County Sheriff Ken Mascara said.

Richard Lloyd told deputies he wanted to “run the Arabs out of our country” so he pushed a dumpster in front of the Port St. Lucie store and set the contents on fire, Mascara said in a news release posted on Facebook.

Lloyd told detectives he assumed the owner was Muslim and that angered him because of “what they are doing in the Middle East,” Mascara said.

“It’s unfortunate that Mr. Lloyd made the assumption that the store owners were Arabic when, in fact, they are of Indian descent,” Mascara said. 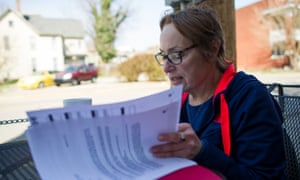 Each month, shots for her severe asthma cost $3,000. Quarterly injections for knee pain cost $3,200. Medication for depression costs $900. She has had seven back surgeries, two shoulder surgeries, and two knee surgeries since 1985. The largest public health programs in America – Medicaid and Medicare, which aid the poor and the elderly – paid for nearly all of it.

Yet those programs are now threatened by the men she voted for: Donald Trump and former Indiana governor Mike Pence.

“I’m all in favor of repealing it,” she said about Republicans’ push to do away with the Affordable Care Act (ACA), popularly known as Obamacare. But, she said, when you talk about cutting Medicaid: “I don’t agree with that at all.”

Dramatic changes to Medicaid – the scheme to help poorer Americans get healthcare – are just part of the reforms in a Republican bill leaders are trying to force through Congress at lightning speed. However, since it was introduced last Monday, the American Health Care Act has met opposition from the left, significant sections of the Republican party, and a slate of doctor, hospital and patient associations. It’s been called a “legislative orphan appealing to no one”.

Though Phelps said she would support Trump even if it passed, she is upset by the idea of Medicaid cuts.

READ MORE HERE: Trump supporters in the heartland fear being left behind by GOP health plan | US news | The Guardian

FBI Director James Comey (left) has asked the Justice Department to publicly reject President Trump’s allegations about the wiretapping of his private phones.

On Saturday last weekend, Donald Trump alleged in a series of tweets that former President Barack Obama orchestrated a “Nixon/Watergate” plot to tap Trump’s phones at his Trump Tower headquarters last fall in the run-up to the election. Trump concluded that the former president is a “Bad (or sick) guy!”

Trump cited no evidence for his accusation.

Folks, we’ve got a huge problem on our hands.

A bit dated (Dec. 2015) analysis of the United Nations vetting process and a detailed explanation of the step by step process along with the length of time it takes the numerous agencies involved, various procedures and how restrictive the US refugees admission process is compared to the requests especially when it comes to Syrian refugees.

And from the Heritage Foundation no less.

Here’s the rub, the author concludes by referencing the San Bernardino Attack and noting the such an event means that the US needs to be extra cautious.

Problem? The author’s conclusion is thoroughly suspect. Why?

Well, Raheel Farook was not from Syria and not a refugee and actually served in the U.S. Navy in the Iraq War from 2003 to 2007, and was awarded two medals for service during the War on Terror. He was described by friends and neighbors as sociable and extroverted compared with his brother Rizwan. In 2011, he married Tatiana, a Russian citizen who immigrated to the U.S. in 2003 from her home village of Vysokiy, located 400 miles (640 km) from Moscow. (from a Wikipedia article and footnoted sources)

Source: How the Refugee Vetting Process Works | The Heritage Foundation

ADay Without Laughter is a Day Wasted.

Legislators are calling on President Trump to offer evidence that Trump Tower was wiretapped.

WASHINGTON (AP) — The House intelligence committee is asking the Trump administration for evidence that the phones at Trump Tower were tapped during the campaign as its namesake has charged.

President Donald Trump asserted in a tweet last week: ‘‘Terrible! Just found out that Obama had my ‘wires tapped’ in Trump Tower just before the victory. Nothing found. This is McCarthyism!’’ He continued the allegation against former President Barack Obama in other tweets but offered no evidence.

On Saturday a senior congressional aide said the request for evidence by Monday was made in a letter sent by the committee chairman, Rep. Devin Nunes, R-Calif., and the panel’s ranking Democrat, Rep. Adam Schiff, D-Calif., according to the aide, who wasn’t authorized to discuss the request by name and requested anonymity.

Obama’s director of national intelligence, James Clapper, has said that nothing matching Trump’s claims had taken place, but that has not quelled speculation that Trump’s communications were monitored by the Obama administration. Trump has asked Congress to investigate.