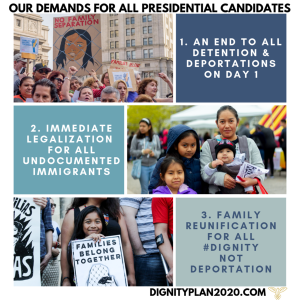 Yesterday, we reported on the various actions taken by Movimiento Cosecha Michigan, in Detroit during the Democratic Presidential candidate debates.

There has been tremendous support for the actions that Movimiento Cosecha has taken in recent weeks, especially those actions that have confronted Joe Biden for his role in the deportation of 3 million immigrants, while acting as the VP in the Obama administration.

However, some people liberals and Democrats have not been supportive of the actions taken by Movimiento Cosecha. One commenter that was critical of the protests that disrupted the debates on Wednesday night, said:

Not the time or place. The behavior at tonight’s debate was disgraceful and unprecedented.

This statement is instructive on many levels, so lets spend some time unpacking it.

First, the action during the debate was NOT unprecedented. Dissidents have been interrupting political candidates for decades, which makes this observation false.