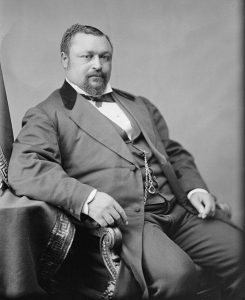 On May 21, 1881 Blanche Kelso Bruce became Register of the Treasury which placed his name on all U.S. currency.

The first African American Senator to serve a full term, Bruce was an outspoken advocate for the rights of African Americans, Native Americans, and Chinese Americans. Bruce had been born in slavery near Farmville, Prince Edward County, Virginia on March 1, 1841.

Learn more about Bruce at BlackPast.org.

Do you know how many African American U.S. Senators there have been to date?

Here are resources to #TeachReconstruction.