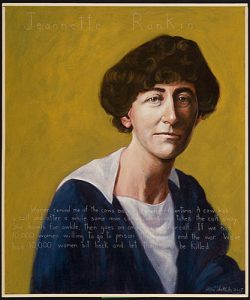 On April 2, 1917, Jeannette Rankin, a Republican from Montana, took her seat in the U.S. House of Representatives.

The first woman ever elected to Congress, she became the only member to vote against U.S. entry into both world wars and later protested the Vietnam War.

Though women in the United States weren’t granted the right to vote for three more years with passage of the 19th amendment, women in Montana, Wyoming, Utah, and Washington had full voting rights before statehood.

Rankin was instrumental in passing laws that made married women citizens in their own right.

The description above is from peacebuttons.info.

Rankin is featured in the “Unsung Heroes: Encouraging Students to Appreciate Those Who Fought for Social Justice” lesson for middle and high school. 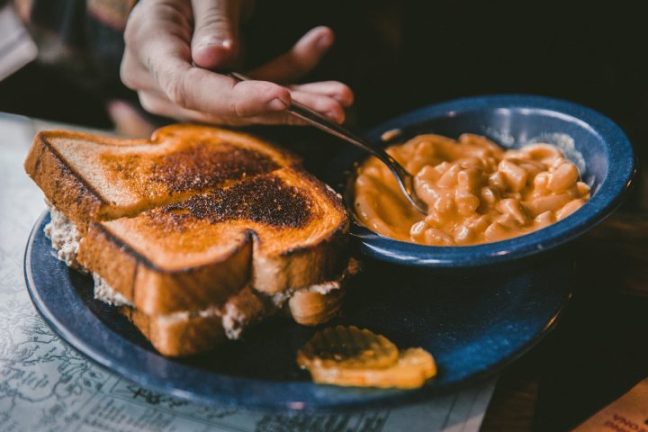 Just a few years ago, the College and University Food Bank Alliance, which helps schools establish food pantries, had 184 members. By early 2019, though, the number had more than tripled to 700-plus members.

As tuition rises and the other costs of college go up, campus administrators are forced to face a troubling reality: Many college students don’t get enough to eat. In response, hundreds of schools — from community colleges to Ivy League universities — have opened food pantries or stores selling subsidized groceries. Many students ages 18 to 49 are not eligible for the federal government’s Supplemental Nutrition Assistance Program, also known as food stamps.

At Cornell University, the student-run Anabel’s Grocery attracted about 2,000 unique customers within the first several months, according to the student newspaper. The store offers “low-cost groceries for all Cornell students and subsidies for those who qualify.” At the Knights Helping Knights Pantry at the University of Central Florida, students can pick up five free food items a day. Portland Community College opened pantries on all four of its campuses and created a co-op with free school supplies, bus passes, clothes and other items.

Members of the University of Southern California men’s relay team, 1934. (The Happy Rower/Flickr)
How much of an edge do athletes and the children of alumni have in elite college admissions? How do they compare with other students in terms of SAT scores and other academic metrics? We’ve pulled together research that examines these questions and others.

Operation Varsity Blues, the college admissions bribery scandal involving fake test scores and athletic credentials, has raised questions about how much of an edge student athletes and wealthy students already have in the admissions process at the country’s most prestigious schools.

How much better are an athlete’s chances of getting into a top university compared with other students? What about “legacy” students, whose family members are alumni?

Multiple research studies over the years have found that admissions officers give both groups preferential treatment. But estimates vary in terms of how much of an advantage they enjoy. For example, a study of admission rates at 30 top-tier schools found that the odds of admission for legacy students were as high as 15.69 times the odds of admission for other students. Another study, which focuses on three private research universities, found that the edge given to athletes is roughly equivalent to an extra 200 points on the SAT and that it’s worth an additional 160 points for legacy students. Meanwhile, research offers a mixed view of the academic qualifications of these two groups of students. Some studies of elite institutions indicate that athletes and legacies have lower test scores or fall short in other areas when compared to student bodies as a whole.

As improved Medicare for All gains momentum, single-payer opponents will undermine our efforts by proposing watered-down reforms that preserve a role for private insurance, such as the public option.

But as we?ve recently written, this tactic has a long history among both Democrats and Republicans. All of today?s current proposals — from Medicare for All to the public option to ?repeal and replace? — have been circulating in various forms since the 1940s.

In an article published today in the Annals of Internal Medicine, “Medicare for All and its rivals: new offshoots of old health policy roots,” we reveal the historical foundations of today?s health care debate.

For example, the Medicare for All Act of 2019 (H.R. 1384), recently filed by Reps. Pramila Jayapal and Debbie Dingell, traces its roots back to the 1948 Wagner-Murray-Dingell national health insurance bill and the 1971 single-payer plan proposed by Sen. Ted Kennedy and Rep. Martha Griffiths. Today?s ?public option? plans that would offer individuals the option to buy-in to Medicare or Medicaid were first proposed by two Republicans, Sen. Jacob Javits and Rep. John Lindsay in the early 1960s. Even President Trump?s recent budget proposal — which seeks to shrink the government?s role in health care by cutting trillions in Medicare and Medicaid funding, further privatizing Medicare and the VA, stripping the basic protections of the ACA, and saddling patients with higher deductibles ? echoes policies favored by President Richard Nixon and others in 1971.

When Sen. Kennedy introduced a comprehensive single-payer bill in 1971, Republicans countered with a public option alternative that was friendlier to private insurers, and some conservative Democrats proposed settling for coverage with sky-high deductibles. Sound familiar? Sen. Kennedy held his ground, and complained that the alternative to his single-payer plan …calms down the flame, but it really doesn’t meet the need,? an observation that still holds true today.

We hope that PNHP members will find this article useful, and will share it with others. It’s important to press our political leaders not to repeat the mistakes of earlier generations that tinkered around the edges of the U.S. health system while ignoring its fundamental flaws.