The primaries will trim down the candidates in Alabama. While there are 11 Republicans & 8 Democrats vying for the seat, only 3 are considered contenders.

The student loan industry is a major player in political contributions and money in politics, and is even more active when it comes to lobbying

Source: The politics behind your college and how you pay for it

Another editorial in the San Diego Union attacks teachers and the California public education system. The author has a personal work history of harming California’s public schools by scheming to privatize them. The editorial was written by Rae Belisle. She is identified as a former member of California’s State Board of Education, but she is so much more than that.

“Competition for success in the 21st-century economy is increasingly tied to an educated workforce with strong science, technology, engineering and math skills.

“Parents, community and business leaders, and policy makers trying to keep and grow jobs in California should be shocked that in just a few short years California has won the race to the bottom.” 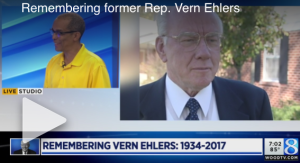 On Tuesday, former US Congressman Vern Ehlers passed away at the age of 83.

In the past few days there has been a number of news stories reflecting on the life of the former Congressman, with virtually every story communicating nothing but respect and admiration for Vern Ehlers.

An earlier story on MLive provided some background on Ehlers’ political career from Kent County Commissioner to Congressman. In addition, some of the news coverage highlighted certain policies that the former Congressman had “championed,”…