“In addition to the large sums of money that the Dick & Betsy DeVos Foundation provides, several other family foundations make sizable donations to ArtPrize, along with dozens of other sponsors.

To top it off, while a few artists win cash prizes, all of them give their labor for free. Imagine having several thousand artists create all kinds of art pieces, in various mediums, and not get compensated one penny.

It seems that the DeVos family has figured out another way to redirect public funds to cover some of the cost of ArtPrize, use non-taxed foundation money to underwrite the event, have sponsors pony up thousands more and get 2,000 artists to give free labor and pay money to enter this damn contest. Isn’t capitalism wonderful”
Read Jeff Smith’s full blog post here – https://griid.org/2017/05/28/the-funding-scheme-of-artprize/#like-25690 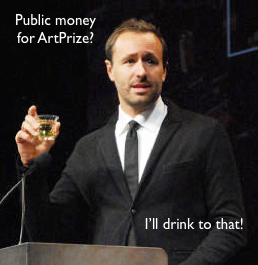 Yesterday, MLive reported that the City of Grand Rapids has a new event policy, which changes the payment structure for events held in Grand Rapids.

The change will impact ArtPrize the most, which will now be paying at least $9,000 in new fees to the city this year, said Tom Almonte, managing director of public services.

The change was a part of a large new fee structure the commission passed in order to make it easier for smaller community events to afford permit applications. However, the change doesn’t fully account for the lowered cost as $75,000 from the city’s general fund will be used to cover the difference.

The MLive article frames the issue as if entities like ArtPrize are being penalized for having an event with large crowds, when the reality is just the opposite. Like most coverage of ArtPrize, there is no critical inquiry…