“During the manipulation phase, Babiak and Hare go on to explain, psychopaths construct the “psychopathic fiction.”They pour on the charm to hook their victims emotionally and gain their trust. They present themselves as kind-hearted individuals. Of course, in order to do so, psychopaths resort to outrageous lies since, in reality, they’re just the opposite. In romantic relationships in particular, they depict themselves as not only compatible with you, but also as your soul mate. While seeming your complement, they also present themselves as your mirror image. They claim to share your interests and sensibilities. Babiak and Hare observe: “This psychological bond capitalizes on your inner personality, holding out the promise of greater depth and possibly intimacy, and offering a relationship that is special, unique, equal–forever.” (Snakes in Suits, 78)…” 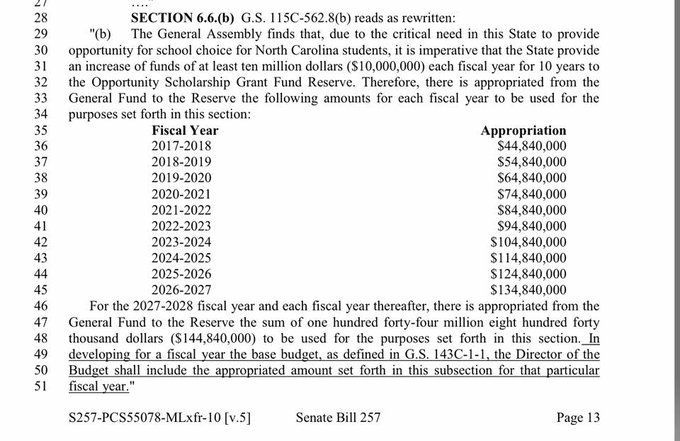 Just found this in the budget. Looks like the plan is to dramatically increase vouchers for private school over the next decade.

Jeff Jackson is a Democratic senator in North Carolina whose fifteen minutes came in 2015 when he was the only legislator to show up for work on a snow day.

What he “just found” was not really a secret. Back in February, reporters were noting that the GOP legislature was planning to triple voucher money (NC calls them “opportunity scholarships” as in “the opportunity for people to make a ton of money pretending to educate students”) from $45 million to $145 million.

The proposed increase is just one more point of contention between the new Democratic governor and the GOP’s straight-out-of-the-19th-century legislature. Debate has highlighted some of the standard pro-voucher arguments that we can all expect to be hearing.

Expect, also, to hear voucher fans find new and fun ways to wiggle around the accountability issue. North Carolina charters are completely unaccountable to anyone. You’ll be glad to now their students do have to take standardized tests kind of like the ones that public school students take– they just don’t have to report the results publicly. Here’s an explanation from UNC-Chapel Hill professor Eric Houck on the governor’s claim that voucher schools have no accountability:

So, big words can mean many different things. Right.

While all of that may seem a little fuzzy, one thing is clear– unless someone derails the GOP budget, voucher schools in North Carolina are about to enter a decades’s long Christmas, with an ever-growing gift of taxpayer money coming their way. Public schools? As always, North Carolina’s GOP remains committed to making public schools go away as anything but a holding pen for Those People’s Children.