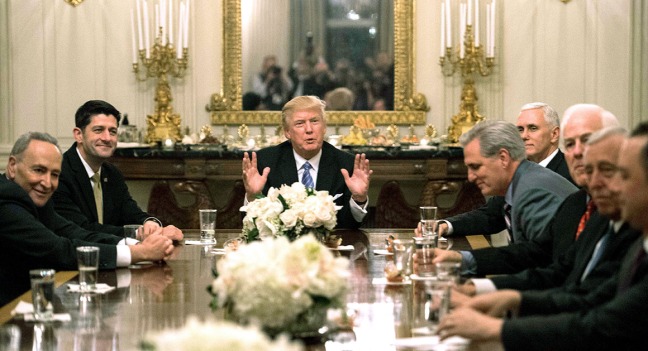 In his first meeting with congressional leaders of both parties since taking office, President Donald Trump on Monday reiterated a debunked claim that he only lost the national popular vote because of widespread voter fraud.

Multiple sources described the exchange as part of a generally light-hearted meet-and-greet between Trump and the lawmakers at the White House. It’s unclear if any of the leaders responded to Trump.
Senate Majority Whip John Cornyn (R-Texas) confirmed that Trump made the voter fraud claim, but added, “I didn’t pay a lot of attention to it. I was ready to move onto some policy issues. I didn’t anticipate that discussion.”

It’s further evidence of Trump’s fixation with his narrow victory, in which he captured an Electoral College handily despite losing the popular vote to Hillary Clinton by nearly 3 million votes. Nearly three weeks after his Election Day victory, as late California returns drove up Clinton’s popular vote margin, Trump tweeted incorrectly about the size of his victory.