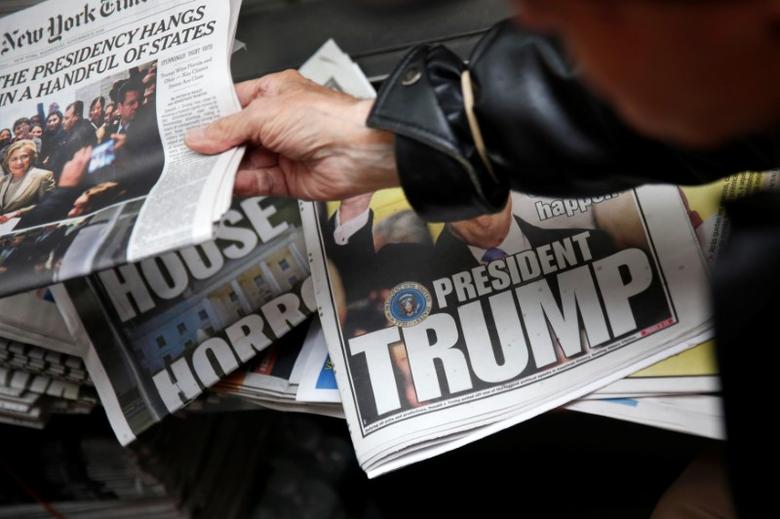 Some of the most controversial proposals Donald Trump made while running for U.S. president were gone from his campaign website by Thursday, including his call to ban Muslims from entering the country and his promise to cancel the Paris Climate Agreement.

“As a woman who has experienced the trauma of violence, sexual abuse, and a lifetime of harassment, this is personal. I must confess, I feel re-traumatized by those voters who supported a predator because you so loathed ‘the elite.'”
—from our Reader Stories: http://bit.ly/2eDPwSc

Source: We Do Not Have to Reconcile with Our Abuser | Sojourners

WASHINGTON (AP) — President-elect Donald Trump on Thursday refused to let a group of journalists travel with him to cover his historic first meeting with President Barack Obama, breaking a long-standing practice intended to ensure the public has a watchful eye on the nation’s leader.Trump flew from New York to Washington on his private jet without that “pool” of reporters, photographers and television cameras that have traveled with presidents and presidents-elect.Trump’s flouting of press access was one of his first public decisions since his election Tuesday.Trump’s meeting with Obama on Thursday will be recorded by the pool of White House reporters, photographers and TV cameras who cover the president.

Eclectablog, while often focusing on national issues, has a Michigan-centric component as regular readers know. That’s largely because we are the testing ground, the beta testers for what Republicans want to achieve nationally.

Michigan’s Governor is a businessman with no previous experience in government and who surrounds himself with like-minded operatives who believe that “government should be run like a business”. I’d like to present you with Exhibit A as to why that is a horrifically terrible idea:

Read more here: Pay attention to Michigan. We are a micro-version of what is happening nationally. | Eclectablog