A Case of VAM-Based Chaos in Florida
Posted by Audrey Amrein-Beardsley: 15 Sep 2016

Within a recent post , I wrote about my recent “silence” explaining that, apparently, post the passage of federal government’s (January 1, 2016) passage of the Every Student Succeeds Act (ESSA) that no longer requires teachers to be evaluated by their student’s tests score using VAMs (see prior posts on this here and here about “Value Added Measurements), “crazy” VAM-related events have apparently subsided. While I noted in the post that this also did not mean that certain states and districts are not still drinking (and overdosing on) the VAM-based Kool-Aid, what I did not note is that the ways by which I get many of the stories I cover on this blog is via Google Alerts. This is where I have noticed a significant decline in VAM-related stories. Clearly, however, the news outlets often covered via Google Alerts don’t include district-level stories, so to cover these we must continue to rely on our followers (i.e., teachers, administrators, parents, students, school board members, etc.) to keep the stories coming.

Coincidentally — Billy Townsend, who is running for a school board seat in Polk County, Florida (district size = 100K students) — sent me one such story. As an edublogger himself, he actually sent me three blog posts (see post #1, post #2, and post #3 listed by order of relevance) capturing what is happening in his district, again, as situated under the state of Florida’s ongoing, VAM-based, nonsense. I’ve summarized the situation below as based on his three posts.

In short, the state ordered the district to dismiss a good number of its teachers as per their VAM scores when this school year started. “[T]his has been Florida’s [educational reform] model for nearly 20 years [actually since 1979, so 35 years]: Choose. Test. Punish. Stigmatize. Segregate. Turnover.” Because the district already had a massive teacher shortage as well, however, these teachers were replaced with Kelly Services contracted substitute teachers. Thereafter, district leaders decided that this was not “a good thing,” and they decided that administrators and “coaches” would temporarily replace the substitute teachers to make the situation “better.” While, of course, the substitutes’ replacements did not have VAM scores themselves, they were nonetheless deemed fit to teach and clearly more fit to teach than the teachers who were terminated as based on their VAM scores.

According to one teacher who anonymously wrote about her terminated teacher colleagues, and one of the district’s “best” teachers: “She knew our kids well. She understood how to reach them, how to talk to them. Because she ‘looked like them’ and was from their neighborhood, she [also] had credibility with the students and parents. She was professional, always did what was best for students. She had coached several different sports teams over the past decade. Her VAM score just wasn’t good enough.”

Consequently, this has turned into a “chaotic reality for real kids and adults” throughout the county’s schools, and the district and state apparently realized this by “threaten[ing] all of [the district’s] teachers with some sort of ethics violation if they talk about what’s happening” throughout the district. While “[t]he repetition of stories that sound just like this from [the districts’] schools is numbing and heartbreaking at the same time,” the state, district, and school board, apparently, “has no interest” in such stories.

Put simply, and put well as this aligns with our philosophy here: “Let’s [all] consider what [all of this] really means: [Florida] legislators do not want to hear from you if you are communicating a real experience from your life at a school — whether you are a teacher, parent, or student. Your experience doesn’t matter. Only your test score.”

Isn’t that the unfortunate truth; hence, and with reference to the introduction above, please do keep these relatively more invisible studies coming so that we can share out with the nation and make such stories more visible and accessible. VAMs, again, are alive and well, just perhaps in more undisclosed ways, like within districts as is the case here.

LINK: A Case of VAM-Based Chaos in Florida | VAMboozled!

On September 30, 2015, the U.S. Federal Court of Appealsoverruled a lower court’s decision that colleges and universities could pay student athletes up to $5,000 in deferred compensation, which would be held in a trust until the athletes leave college. This decision was a win for the National Collegiate Athletics Association (NCAA), which claims that the amateur nature of college sports should keep it exempt from antitrust laws, or laws put in place to ensure fair and free competition in an open marketplace. The original class action lawsuit, O’Bannon v. NCAA, involved a lead plaintiff, former UCLA basketball player, Ed O’Bannon, who claimed that athletes should be allowed earnings from the marketing and commercialization of their images and likenesses after they leave college.

The 2014 ruling in that case was made by Judge Claudia Wilken, who maintained that the NCAA was in violation of theSherman Antitrust Laws. The decision to reverse that ruling by the U.S. Federal Court of Appeals in 2015 comes on the heels of another case involving college athletes and whether or not they are entitled to compensation. In April 2015, Northwestern University’s football team voted to unionize claiming they were employees of Northwestern, and thus deserved the right to collectively bargain. In August of 2015, the National Labor Relations Board made the decision that it did not have jurisdiction in the case, effectively blocking the unionization of the athletes. Many saw this as a win for NCAA leaders, who have long argued that paying athletes will result in an unfair marketplace where richer schools are able to scoop up all the best high school athletes by paying a premium.

Despite the ongoing debate about whether college athletes should be paid, little research has been done to examine the connection between college athletics programs and the money they make for their academic institutions. Many of these programs bring in millions of dollars annually as highlighted in a December 2015 study in Management Science. “How Much Is a Win Worth? An Application to Intercollegiate Athletics” looks at how each game win during the Division 1 men’s football and basketball seasons translates into dollars for a given sports program. Doug J. Chung, an assistant professor at the Harvard Business School, surveyed data from 117 schools between 2003 and 2013. Chung separated these Division 1 programs into more and less established athletic programs. Power Five Conference teams made up the more established category, while lesser known programs were schools that have a shorter record of athletic success and do not participate in the prestigious conferences, such as the Big 10 and Big 12 conferences.

This study’s findings include:

Chung mentions in his study that one area for further research is to examine how the revenue for each team and school breaks down in terms of sales categories, such as tickets and team merchandise. Chung, who is an avid college sports fan himself, says he hopes his work will inform the debate on whether and how college athletes are compensated by the schools they represent. 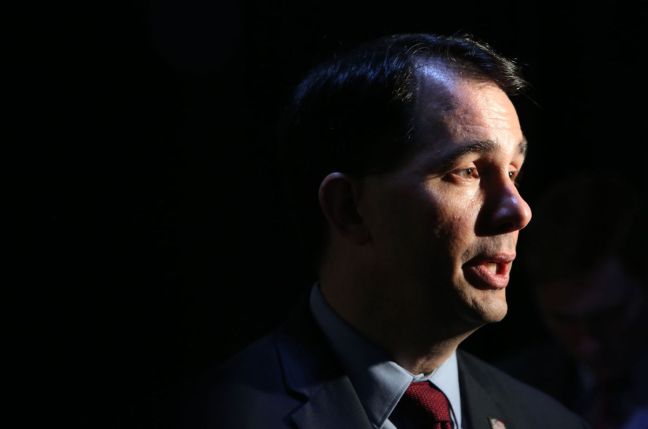 An investigative report from The Guardian sheds new light on the relationships between Gov. Scott Walker and donors to the Wisconsin Club for Growth during the governor’s 2012 recall election…

“The report raises questions about legislative efforts to shield lead paint manufacturers from lawsuits seeking compensation for lead poisoning. The leaked documents show $750,000 in donations to Wisconsin Club for Growth from Harold Simmons, the owner of one of the United States’ leading producers of lead used in paint until it was banned. ”