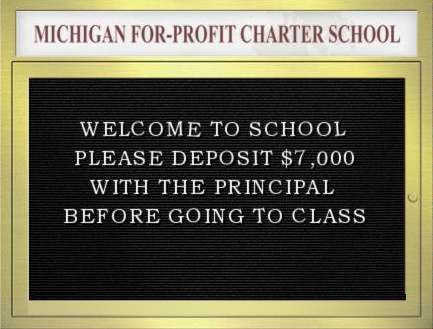 It’s been a rough couple of weeks for the charter school industry, and it doesn’t look like things are looking up any time soon. In the wake of a devastating segment by John Oliver on the charter school business, and calls from civil rights groups like the NAACP and Black Lives Matter, the public is finally starting to question the wisdom of funding two parallel school systems when public resources are in such short supply. 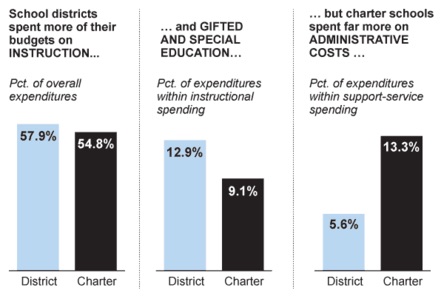 The most recent nail in the coffin of the charter school movement comes in the form of a recent report from the Pennsylvania School Board Association that compares spending priorities and patterns between the state’s charter schools and public schools. Unsurprisingly, the news isn’t good for charters. The study compared spending in 85% of Pennsylvania’s charters against all of the state’s public schools, and the results reveal massive differences in what each sector values. Priorities & Values According to the report …

This week, the Snyder administration’s School Reform Office suggested that it could eventually close schools where students have low rankings on state tests.

Schools that rank in the bottom 5% — with some exceptions — would be closed under this plan, which would shutter more than 100 schools from across the state.

In an opinion piece this week in the Lansing State Journal, John P. Smith III criticized the state’s plans.

Smith is a professor of educational psychology at Michigan State University and he joined Stateside to talk about why he thinks the closing of the schools, and the methodology that led to that decision is flawed.

Listen to the full interview above to hear Smith’s concerns with the changes in standardized testing, and what will happen to the students who have their schools close.

Listen to the interview here:

“In May 2011, Wisconsin’s Republican Gov. Scott Walker approved Senate Bill 23, which prohibited the state’s municipalities from enacting paid sick leave laws.”
“To understand how, consider the path that Bill 23 took after Walker signed it. In the summer of 2011, copies were handed out at the annual meeting of the American Legislative Exchange Council, or ALEC, a 43-year-old organization that brings together state legislators and corporate representatives to write cookie-cutter laws for statehouses across the country. Its members include many of the nation’s largest companies, a quarter of state legislators, one-fifth of the U.S. Congress, and seven sitting governors. Since its distribution in the ALEC committee room, along with a U.S. map designed by the National Restaurant Association, versions of the sick leave policy have been adopted in Alabama, Arizona, Florida, Indiana, Kansas, Louisiana, Michigan, Mississippi, Missouri, Oklahoma, and Tennessee. Cities in those states no longer have the right to decide whether the people who work there ought to receive a guarantee of sick time with pay.”