“This morning, the US Education Department released a collection of data drawn from 2013-2014 surveys of nearly every single one of the nation’s 95,000 public schools. The results are part of the Civil Rights Data Collection, a survey done every other school year to measure access and equity in the public school system. The data show that 850,000 high school students didn’t have access to a school counselor. Meanwhile, 1.6 million (K-12th grade) students attended a school that employed a law enforcement officer but no counselor.”

“There is absolutely nothing more frustrating, more damaging to your soul than when you know you’re following the rules and being treated like you are not,” said U.S. Sen. Tim Scott of South Carolina.

While many law enforcement officers do good, he said, some do not. “I’ve experienced it myself.”

Scott revealed that he has been stopped seven times in the course of one year as an elected official. “Was I speeding sometimes? Sure. But the vast majority of the time I was pulled over for driving a new car in the wrong neighborhood or something else just as trivial.”

Read and listen to more here: Senator Tim Scott Delivered A Personal Speech On His Encounters With Police : NPR 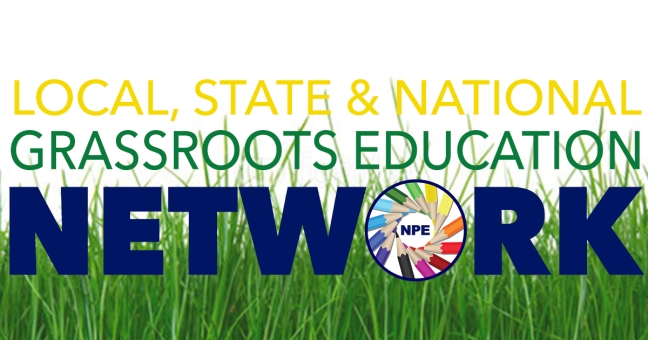 RALLY TO STOP THE ALEC AGENDA

The American Legislative Exchange Council (ALEC) has a clear agenda when it comes to public schools—it wants them privatized. ALEC is a Washington D.C. lobbying group funded by corporations and the super-rich, which writes model legislation that promotes private company takeovers of public schools, school vouchers, constriction of collective bargaining and due process for teachers, teacher evaluations based on test scores and other anti-public school bills.

The Center for Media and Democracy outlined the ALEC agenda here. ALEC will hold its annual meeting July 27 – 29 in Indianapolis. The damage done by ALEC sponsored legislation in Indiana is nearly irreparable. Join the Indiana State Teachers Association and other public education advocates in Indianapolis to rally against ALEC.

You can find additional information here

WE ARE DOING SOMETHING RIGHT WHEN WE ANGER

Last month, NPE Action issued a petition to the Democratic Party that described, in detail, what the party’s platform should contain. You can read that petition here. Many of you, along with 47 pro-public education grassroots groups, signed on. Thanks to the efforts of Chuck Pascal, Troy LaRaviere and others, parts of our petition made it into the platform via amendments. You can find those amendments here. Search for the amendments proposed by Chuck and Troy.

Democrats for Education Reform (DFER) were not pleased. You can read here about their dismay with the significant changes in the language. NPE Action sent a similar petition to the Republican Party, which you can read here.

Source: School is out, but the fight to preserve public education continues – NPE Action

The Cost of Choice

As a vote over raising the charter cap in Massachusetts looms, an extreme cautionary lesson from Michigan.

In my interview with him, he explains what happened when Michigan lifted its cap on charter schools – and why another state that starts with ‘M’ would do well to heed the Mitten state’s cautionary tale…

Follow this link for more: The Cost of Choice – EduShyster

OH MY GOODNESS!!! What Didn’t Happen In Delaware………..
by kavips
You may remember… Only two states were accepted in the first Race to The Top Competition… Delaware..*yay* and Tennessee. Same agenda. Same connections to the Governor’s Association and Chiefs For Change… Same influences, etc…

Let me tell you where Tennessee is now…

You may remember… Only two states were accepted in the first Race to The Top Competition… Delaware..*yay* and  Tennessee.   Same agenda. Same connections to the Governor’s Association and Chiefs For Change… Same influences, etc…

Let me tell you where Tennessee is now…

In three weeks, they start their school year… yes, August 3rd.   This past year they instituted a non-renewal policy that said if you’re scores were not above standard, your contract would not be renewed… AND you would be marked as ineligible for rehire.

(Someone thought the threat of firing would cause scores to rise.)

One of their larger districts is undergoing some pain right now…

I grew up unaware of my own white privilege. But as I raise my three black children, my eyes have been opened. This is what Black Lives Matter means to me.

I understand that many people aren’t in our position: the white parents of black children. So please allow me to explain it to you. If you’ve never experienced being gawked at by patrons at a restaurant or ignored by a cashier — only to have her politely greet the white man standing behind you — I get it. If you’ve never had someone whisper your race in a conversation, as if it’s a curse word that cannot be overheard by nearby children, I get it. And if you’ve never had your ethnicity be the subject of a joke or the center of a stereotype, I get it.

Because for 27 years of my life, I unknowingly basked in privilege. I was never pulled over for no apparent reason or offense, my driver’s license and registration demanded of me. I was never passed over for a job because of my name or my skin tone. I was never questioned or followed by a security officer while goofing around with my friends at the mall. I have always been believed, trusted, and respected by most people I meet, simply because I have peachy colored skin.

But this has not been my children’s experience —

Read the rest of this touching and profound essay here: What I Mean When I Say Black Lives Matter | Babble