The Flint water crisis is complicated, and more details are being revealed nearly every day.

Dayne Walling has lived it from the beginning. Walling was the mayor of Flint from 2009 to 2015, the period of time when crucial decisions were made regarding Flint’s water supply.

Walling tells us that he and the city council had been considering signing on to the Karegnondi Water Authority pipeline even before Governor Snyder put an emergency manager in place to oversee operations in Flint.

“The city had been extending their contract with the Detroit system each year. The long-term contract had run out eight or nine years ago,” he says. They explored many long-term options, including the Flint River, but that option was dismissed because it “just wasn’t feasible.”

Read and listen to the whole report here: Former Flint mayor on water crisis: “It’s frustrating to me that more has not been done” | Michigan Radio

Here’s the key passage in this news report in my view:

The two systems (Detroit & KWA) have some notable differences. KWA is “a more cooperative base,” with each community paying for its share of the project and eventually treating its own water for its customers, Walling explains, while the Detroit model has a “distance and elevation cost built into their system,” meaning customers further from the service center end up paying more for their water.

So, both systems would supply Flint and Genesee County with Lake Huron water, but KWA was determined to be “a few hundred million dollars cheaper,” Walling tells us.

“That was the recommendation that emergency financial manager Ed Kurtz brought to myself and city council, but we need to be clear that it was DEQ director Dan Wyant, State Treasurer Andy Dillon and Governor Snyder who made that final decision,” he says. 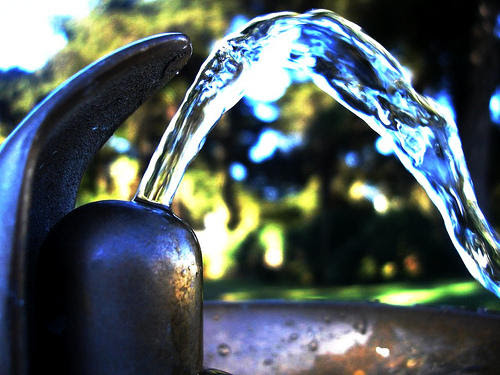 Covering Flint’s Water Crisis
Over the past few weeks, Flint’s water crisis has exploded as a huge national story, with coverage in The New York Times, Time Magazine, and Rolling Stone, as well as national TV news shows. Michigan Radio has been covering this story from the very beginning, including the city’s 2014 water supply switch to the Flint River and the first citizen complaints about the smell and taste of the city’s tap water.
Our reporters have also been explaining the story to listeners nationwide on shows like Morning Edition, All Things Considered, The Rachel Maddow Show, Here & Now, The Diane Rehm Show and On Point, and many local public radio station shows around the country. Last weekend, Lindsey Smith’s documentary about the crisis, “Not Safe to Drink”
was distributed nationally by the Center for Investigative Reporting’s Reveal to public radio stations all over the country.

You can count on Michigan Radio to bring you the latest developments in this ongoing news story. Find all our coverage on the Flint water crisis here

Fear prevents some undocumented immigrants from getting water in Flint

Some Spanish-speaking residents in the city are just now finding out that lead contamination has made the water unsafe to drink.