In a new report, Ivy League admissions deans and others rethink what matters in prospective students, writes Richard Weissbourd.

Are today’s young people hopelessly mired, as pundits and researchers claim, in a selfish, achievement-obsessed culture? And is the college admissions process—commonly assailed for creating an arms race among students and parents that fuels selfishness and achievement frenzy—destined to remain a fundamental part of this problem?

Maybe not. A large group of key stakeholders in the admissions process are saying, “Enough.”

About a year ago, Making Caring Common, a project that I co-direct at the Harvard Graduate School of Education, hosted a meeting of college admissions deans, high school administrators and guidance counselors, character education experts, and other stakeholders. The meeting focused on how the college admissions process might collectively send messages that reverse those trends. The result of that meeting is a report “Turning the Tide,” that has now been endorsed by over 75 key stakeholders in the process, including the admissions deans of all the Ivy League schools and deans and administrators from a wide array of other colleges.

For perhaps the first time in history, a broad range of colleges have come together to send a powerful collective message that what’s important in admissions is not high numbers of impressive accomplishments or long “brag sheets.” Yes, academic engagement matters, but so does meaningful ethical engagement, especially as shown in concern for others and the common good. The report also redefines ethical and intellectual contributions to more fairly capture the strengths of students across race, culture, and class.

What, more specifically, does our report recommend? And how might more high schools play their part in stopping the arms race and inspiring in students a concern for others and the public good?

First, we argue that what’s important in terms of service is not whether it occurs locally or in some distant country, or whether a student shows leadership. What’s important is whether students immerse themselves in an experience that is meaningful to them over a sustained period of time, and whether they learn about themselves; the perspectives of others, especially those who are different in background and character; and their responsibilities toward their communities.

The report also encourages students to work in diverse groups on community challenges, such as an unsafe park or cyberbullying in the school community, and to do with rather than to do for those who are different from them or disadvantaged. Working in racially, economically, culturally, politically, or religiously diverse groups can push students to bump up against their biases and presumptions, offer wonderful opportunities for them to absorb different ways of viewing the world, and develop key problem-solving and group skills that can be valuable later in work and life. If students live in homogeneous communities, high schools might encourage them to engage in diverse groups virtually.

“As key stewards of the college admissions process … we need more high schools to powerfully hold up, expect, and honor in young people a more ethical and meaningful way of leading a life.”

But the success of this recommendation will depend on whether high schools play their part. Success will mean more high schools enabling students to choose from a wide range of community-engagement and service opportunities based on their individual interests and passions. It will mean ensuring that students have time to reflect with each other and adults about what they have learned from these experiences. Perhaps most important, it will mean creating authentic diverse groups or guiding students toward diverse groups that are constructed and facilitated thoughtfully. Without thoughtful facilitation, diverse groups too often simply reinforce divisions and biases.

Second, our report recommends that the admissions process send the clear message to students and to parents and other caregivers that significant and demanding family responsibilities are highly valued, and provide clear opportunities for applicants to discuss these responsibilities. Many students, particularly those in low- and modest-income families, often contribute vitally to others in ways that are not measured by traditional forms of community service. These contributions often build ethical character and demonstrate the perseverance that is key to college success.

These students may be caring for a sick relative, supervising a younger sibling, helping to run a household, or working after school to support their family. Often students can’t undertake extracurricular activities and community service because of these important obligations. High schools can encourage students to describe these demanding contributions in their applications, and also encourage teachers and others who may be aware of these responsibilities to capture them in their student recommendations.

Our report seeks to reduce this stress by emphasizing that quality matters over quantity. Rather than listing high numbers of extracurricular activities, we encourage college applicants to describe two or three activities that have been meaningful to them. We remind applicants that they don’t need to load up on Advanced Placement courses, that two or three are sufficient.

We also challenge parents trying to shoehorn their kids into high-status colleges to focus their children instead on a wide range of schools that might be a good fit academically, culturally, and socially. And we caution parents about overcoaching children in the application process. College admissions is a tremendous opportunity for parents to understand their children more deeply, to uncover with them what makes them thrive, and to support them in writing about their interests and inspirations authentically.

Here, too, high schools clearly have a critical role. High schools can, for example, discourage students from overloading on AP courses (some are doing away with them altogether) and extracurricular activities. They can make sure homework demands are engaging and moderate; alert parents to signs that achievement pressure may have become too much for their children; and work with parents who are cranking up their kids so fiercely that the children are showing signs of stress and depression, such as eating or sleeping poorly.

For too long we have wrung our hands—and pointed our fingers—about a college admissions system that, despite the good intentions of almost all admissions officers, parents, and guidance counselors, increasingly seems to reinforce the wrong messages to our children. Our report, we believe, is one step forward.

But we will never bring about a sea change in the messages our culture sends to young people unless educational institutions at every level and parents join together to elevate and embody a healthier set of values consistently. As key stewards of the college admissions process—and as key stewards of adolescence itself—we need more high schools to powerfully hold up, expect, and honor in young people a more ethical and meaningful way of leading a life.

The latest on the Flint, Michigan, water crisis and growing calls to hold government officials accountable. 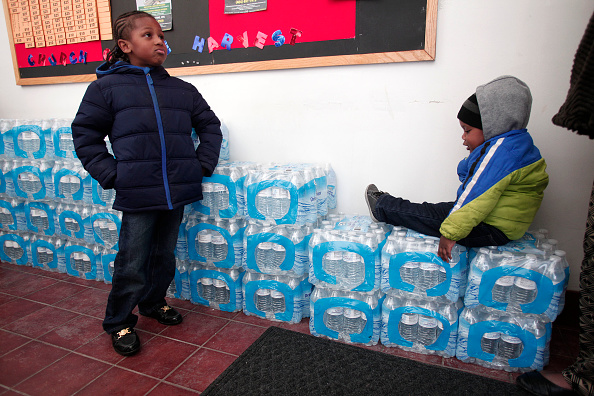 Justin Roberson, left, age 6, and Mychal Adams, age 1, of Flint, Michigan, wait on a stack of bottled water at a Jan. 17 rally where the Rev. Jesse Jackson was speaking about the city’s water crisis. BILL PUGLIANO/GETTY IMAGES

In April 2014, the water supply in Flint, Michigan, was switched from Lake Huron to the Flint River to save money. Almost immediately, residents reported problems with its smell, taste and appearance. Even a local GM plant stopped using it. Officials insisted the water was safe but then, last fall, a Flint pediatrician found dangerous levels of lead in children had risen since the water switch. Fast forward to today – a state of emergency has been declared and there are growing calls to hold government officials accountable. Guest host Susan Page discusses the latest on the Flint water crisis.

Listen to the program segment at this link: The Latest On The Flint, Michigan, Water Crisis – The Diane Rehm Show