The Michigan House Workforce and Talent Development Committee heard testimony Thursday on legislation related to the state’s promise zones as they prepare to formulate a recommendation for the full House, where representatives could vote on two bills in the near future.

The testimony concerned Senate Bill 0539 and Senate Bill 0540, which seek to expand a statewide program launched in 2008. That program aims to cover some or all of the costs of in-state tuition at public schools after financial aid awards with a combination of state and private funds. The bills propose five additional school districts be labeled as promise zones, making a total of 15.

Anna Mooney, deputy chief of staff for Sen. Goeff Hansen (R–Hart), and Brianna McGarry, a legislative assistant for Sen. Jim Ananich (D–Flint), delivered the testimony Thursday on behalf of the two senators, who each sponsored one of the bills.

The Michigan State Treasury supervises the establishment of the promise zones, which currently serve students in 10 high-poverty school districts. Students’ eligibility for these scholarships, as well as the amount they are each eligible to receive, often depend on how long they have attended school in the district, and could also be contingent on factors such as college GPA.

Read the rest of the story here: State representatives may vote on promise zone bills | The Michigan Daily

“You and I didn’t choose to be victims in the Age of Terror,” say Wayne-o, as he kicks off the NRA response to the San Bernardino event.  And you can be sure that as the NRA continues to ramp up their end-of-year fundraising drive they will continue to remind current and prospective members of the connection between the 2nd Amendment and the necessity to defend ourselves from foreign or home-grown terrorists whose attacks Obama and his muddle-headed bunch can’t or won’t do anything about.

“But when evil knocks on our door,” Wayne-o continues, “Americans have a power that no other people on the planet share.” And what is that power? “The full-throated right to defend ourselves and our families with the 2nd Amendment.”  And in case you still don’t get what the message is all about, there’s a one-liner about how the NRA needs “your help.”

Read the rest of this post here: The NRA Calls It The ‘Age of Terror.’ Does The GVP Community Have An Effective Response? | mikethegunguy

Series of Hearings on Academic Struggles in Michigan Classrooms Continues

Education reporters across the nation reported breathlessly that Mark Zuckerberg and Priscilla Chan were “giving” $45 billion to education and public health. They did not get the nuances of the financial transaction behind the $45 billion “gift” of the Zuckerbergs, but writers familiar with the business of philanthropy did. Jesse Eisinger of ProPublica writes in the business section of the New York Times that the Zuckerberg pledge will actually help Zuckerberg, because the money will go to a Limited Liability Corporation that he controls, not a foundation.  Mark Zuckerberg did not donate $45 billion to charity. You may have heard that, but that was wrong.

Here’s what happened instead: The Zuckerberg Gift is Not a Gift, It Goes to a Limited Liability Corporation | Diane Ravitch’s blog

Has the Gates Foundation moved on past the disappointment of creating national standards and national tests to the Next Big Thing: putting all students online?

This is from a reader:

It seems like “Blended Learning” as a slogan is now unmarketable. On to “Personalized Learning” Perhaps Rocketship is yesterday’s news as well: newest savior model is Summit Public Schools Summit was Mark Zuckerberg’s big grant recipient – even before his massive announcement following birth of his first child…

Even though Flint changed back to Detroit’s water system in October, the city’s tap water is “still not safe.”

That’s according to Virginia Tech researcher Marc Edwards, who was a panelist at our Issues & Ale event earlier this week. Flint residents had the opportunity to pose questions to experts

about the water crisis at the event, which also included Dr. Mona Hanna-Attisha of Hurley Medical Center and State Senator Jim Ananich (D-Flint). If you missed the event, you can listen to audio here, and get Jack Lessenberry’s perspective.

Source: Here are some of the questions people in Flint are asking about the water crisis | Michigan Radio 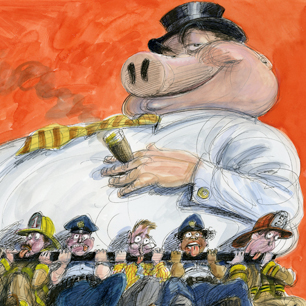 All across America, Wall Street is grabbing money meant for public workers

In the final months of 2011, almost two years before the city of Detroit would shock America by declaring bankruptcy in the face of what it claimed were insurmountable pension costs, the state of Rhode Island took bold action to avert what it called its own looming pension crisis. Led by its newly elected treasurer, Gina Raimondo – an ostentatiously ambitious 42-year-old Rhodes scholar and former venture capitalist – the state declared war on public pensions, ramming through an ingenious new law slashing benefits of state employees with a speed and ferocity seldom before seen by any local government.

Called the Rhode Island Retirement Security Act of 2011, her plan would later be hailed as the most comprehensive pension reform ever implemented. The rap was so convincing at first that the overwhelmed local burghers of her little petri-dish state didn’t even know how to react. “She’s Yale, Harvard, Oxford – she worked on Wall Street,” says Paul Doughty, the current president of the Providence firefighters union. “Nobody wanted to be the first to raise his hand and admit he didn’t know what the fuck she was talking about.”

What few people knew at the time was that Raimondo’s “tool kit” wasn’t just meant for local consumption. The dynamic young Rhodes scholar was allowing her state to be used as a test case for the rest of the country, at the behest of powerful out-of-state financiers with dreams of pushing pension reform down the throats of taxpayers and public workers from coast to coast. One of her key supporters was billionaire former Enron executive John Arnold – a dickishly ubiquitous young right-wing kingmaker with clear designs on becoming the next generation’s Koch brothers, and who for years had been funding a nationwide campaign to slash benefits for public workers.

Like Loading...
“Oh, people don’t even know. If poor people knew how rich rich people are, there would be riots in the streets.” – Chris Rock
​
The research shows that the average American believes  this:
That the richest 20% of citizens most likely own something like 60% of the wealth and that the bottom 40%  most likely own about 10% of the wealth in this country.
The reality is strikingly different.
>>> The top 20% of US households own more than 84% of the wealth.
>>> The bottom 40% of US households combine for a paltry 0.3%.
One set of family members… the Walton family, for example, has more wealth than 42% of all American families combined.
Such striking income disparity creates all forms of other inequalities … educational inequality,  social inequality, racial inequality, mental, physical and emotional health inequality and on and on.
I don’t think this is what the Founding Fathers envisioned for our destiny as a nation.
For more – if you ready for some cold hard truths…
http://www.scientificamerican.com/article/economic-inequality-it-s-far-worse-than-you-think/